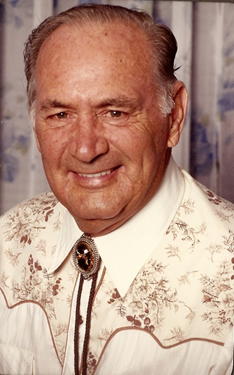 Allan Frost called for around 30 years & was one of Australia's finest square dance callers. This year he would have turned 100 years old on the 20th March. Allan started calling in S.A. when square dancing was in its infancy & getting on its feet. One of his clubs was the "Southern Cross" which he started & ran for 20 years. He then took over the "Seacliff Weavers" club in 1973 from Roger Weaver & it was renamed "The Weavers" square dance club, where he called for some 18 years. That same year he was asked to run a dance for the YMCA at Elizabeth, where a club was formed not long after & became known as the "Shooting Stars". Allan called for this square dance club on a fortnightly basis for about 10 years.

I started my first club in S.A. in 1973 which was the Wild Frontier Square Dance Club. With a lot of help & guidance from Allan, I got my new club off the ground & running. Allan gave me encouragement & helped me as a new caller which I have never forgotten. But it was Allan who really put S.A. on the square dance map by introducing a higher standard of calling & a higher level of dancing in this state. Allan was highly regarded throughout the country & a great draw card at our Australian National Conventions with his smooth style of calling & clear melodious singing voice.