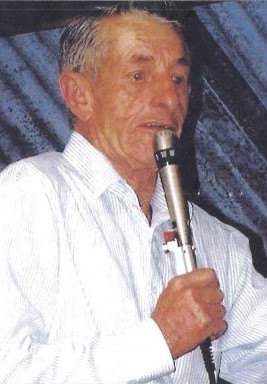 I was born in Emmaville, on the 28-09-39, eldest son of
Tom and Doris Knight, who had a small farm in Stannum,
a small country town with a Store, Post Office, Church
and School - 55kms north of Glen Innes.

I started school at Stannum Public, which I often refer to
as Stannum High, at the age of seven, (about 40 kids) and
left when I was fourteen, (back to 20 kids).

I started farm work for Mum and Dad and any other work I could find. Went
shearing to the other side of Goondiwindi with a shearing gang when I was
sixteen. I had to grow up in a hurry. Back home - woodcutting for local dredge
and contract ploughing etc. with an old second hand tractor.

Val and I met, and after a few months decided to get married. Not having a
permanent job, I applied for a job on Severn Shire. I started work on the 18-07-61
as a labourer on $35.00 per week. We were married on 23-12-61 and in due
course two daughters arrived, first Julie then Sue. We now have five grand
children.

Fifteen years later we decided I should do an Overseer Course, which took three
years to complete. Hopefully it would result with a little extra in the pay packet.

Both our girls left home about the same time - Julie hair dressing, Sue nursing.
Val and I were both looking for something we could do together so, when
approached to join a group trying to start Square dancing in Glen Innes, we said
yes. We started in February 1981 with Athol Latham, ten people in all. We
formed the Glen Squares on Anzac Day 25th April 1981 with the help of David
Pearce, David Pitt and the Armidale 8’s. I feel that without their help we would
not have survived.

Sometime in 1982 Athol moved to Tamworth and shortly afterwards I drew the
short straw and become club leader. We had two cassettes, six records, and
borrowed sound gear from Armidale 8’s and a club leader who knew very little.

I’ve attended many callers’ schools with Brian Hotchkies, one with David Smythe
and one with Steve Turner. To quote Brian, “Anybody can call a singing call,
except Barry Knight”. Thank you, Brian and Wilma, for your encouragement. At
one school I was having a bad day and was close to coming home and Karen
Fenton gave me a talking to (thank you Karen).

At one of these schools I was told you can’t call without a Hilton, so with Val’s
help we saved up and finally bought a Hilton. All excited I set the Hilton up and
started to call. Sadly, the same bloody Barry Knight!

In our hey day, we regularly danced five squares in mainstream. Later started to
learn and teach plus. For about 20 years we have been enjoying a plus night at
Ben Lomond with the Armidale dancers once a month.

I still remember the first four calls away from home. Two in Toowoomba, with
Bill McHardy, one in Lismore with Wilma Flannery and one with the Armidale
8’s. With probably about 300 hundred dancers present at each function, I was so
nervous I sounded dreadful. But everybody was so kind and clapped and cheered.
The things we do.

I am a very strong supporter of the Northern NSW Square Dance Association and
was involved in its beginning back in the days of Rohan Clark, who was a caller
from Armidale at that time. It’s been a pleasure working with the other committee
members and a privilege to serve as Caller Education Officer for a number of
years.

I retired from the Severn Shire Council on the 2-7-1999 after 38 years of service
as Labourer, Plant Operator, Ganger, Bridge Foreman, Testing Officer and finally
as Overseer General for the last 18 years. In other words Jack-of-all-trades -
Master-of-None.

I now spend most of my time on the family farm, 55kms north of Glen Innes, with
sheep and cattle, birds in the trees, two dogs to talk to, no traffic and nobody
whining.