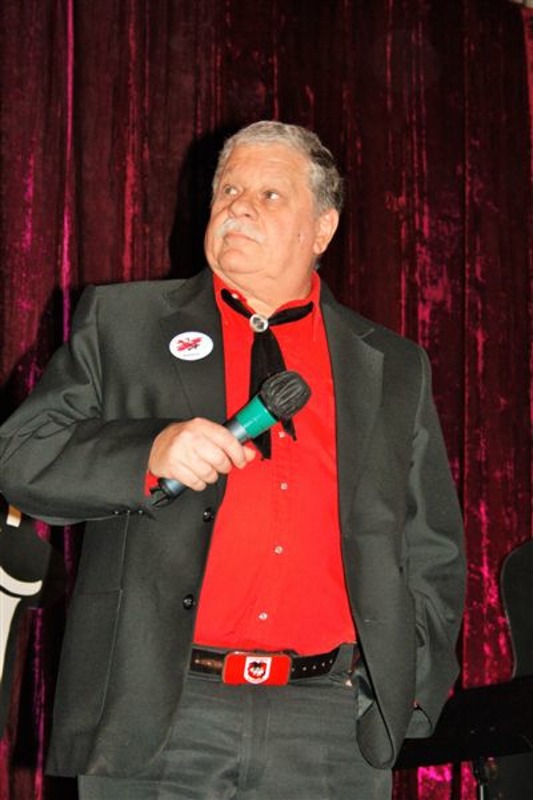 Barry was first introduced to Square Dancing in 1967 by Bob & Shirley McInnes.  At that time Barry was an Electrical Apprentice at the Port Kembla Steelworks and Bob was his tradesman.  Barry's first view of this activity was when he was asked to take Bob & Shirley to a NSW SD Society Ball at Paddington.  Barry spent the night listening to the great callers and watching the dancers have so much fun, that he decided that he wanted to try this activity.

At that time there was no Square Dance Club in Wollongong, only Bob & Shirley dancing to tapes with a group of friends at home and Corrimal Methodist Church.   Barry jumped in and was hooked straight away,  He even had his first attempt at calling  that same year at a special party night.

In 1968 Terry Dodd and Russ Eastment came down from Sydney and started a new club at Tarrawanna.  Barry was there from the first night.

Later that year Ron Jones in Sydney ran a Callers Class...naturally Barry was on board from the start.  Barry called most weeks at Roy Etherington's Wanders Club at Clempton Park in Sydney...just a single Singing call, but the bug would not let go.

He started his first club The StarTwirlers in Wollongong the following year.  This group transitioned into the Whalin 8's.  He also called in Sydney with Arthur Gates at his club in Sutherland. For a while he also had clubs down the coast at Gerringong and Nowra.

In 1974 Barry started a new club in Sydney, in the southern suburb of Loftus.  This new group was called the Red Barons, and has been in operation ever since.

Of course Barry also loved to visit other groups, traveling to Victoria in 1973 for their State Convention.  He met up with many callers who have remained close friends ever since.   National Conventions were a must, and in Adelaide he met up with the Humphries clan from Melbourne.   And of course not too long after married Sue Humphries.   The Victorian Callers Association at the time made him an honorary "Caller-In-Law"

Barry and Sue travelled to the USA in 1976 to attend the 25th National USA Convention in Anaheim, California.  40,000 dancers attended.   At this Convention Barry and Sue met many callers who gave him the idea of travelling again to the USA just to call.  Barry was invited to the USA to call a festival shortly afterwards, and made over 16 calling trips to the US.  He called for many Clubs, Festivals and State Conventions during that time.

In 1990 he was asked to call in Germany and Sweden.  This first trip was to be the first of 17 trips in 14 years to fulfill his calling dates all across Europe.  He has called in England, Chanel Islands, France, Italy, Germany, Austria, Switzerland, Holland, Belgium, Denmark, Norway and Sweden.

New   Zealand was always calling, and Barry was first engaged to call a Festival weekend there in 1984.   He has lost count of the number of times that he has called there.

In 2000 Barry decide to cut the overseas calling engagements in order to spend more time with his family.   He is the proud dad of Amerie (born in 1988) and Alessa (7 years later).  He now also has an 9 year old grandson.

Up until 2018, Barry was still been traveling and calling in Australia and New Zealand for Festival Weekends.

Barry also published a widely read and respected Caller Note Service called FIGURING from 1977 until 1988.  In 2016 he put pen to paper again and now publishes a monthly 40 page magazine for Callers titled "Behind The Mike".  This is a free magazine, distributed via email to over 700 callers worldwide.

As a caller, Barry has also had quite a number of recordings, both Singing calls and Hoedowns.  He has recorded for a number of labels including Sting, Desert, Square Tunes, and is currently still releasing music on A&S Records as well as his own KTM Music label.  In recent years he has released such numbers as "The Carnival Is Over", "I Had a Dream", "The Magic Is There", "Geisha Girl", and others.  His Hoedown record "Hogan, Hilts & The Duke" (a mix of the themes to Hogan's Heroes, The Great Escape & The Green Berets"), was released in 2017 and has sold very well.  His new Hoedown record "Colonel Bogey" (Bridge on River Kwai March and Sink The Bismark) is also loking good for sales.

He has been actively involved in all aspects of Square Dancing over the years, not just as a caller and teacher, but in the administrative side as well.   He has been President of the NSW Callers Association, Education Officer for SARDANSW, Publicity Officer for SARDANSW, Program Manager at two National Conventions in NSW as well as 6 NSW State Conventions.   He is currently serving on the Board of the Australian Callers Federation (ACF) as Chairman, as well as holding the positions of Registrar and State Coordinator.

In what little spare time he has, Barry is a keen Gamer....not the gambling type games, but solid strategy Boardgames.  He also served as President of the local University Guild Games Group for a number of years.  He is still actively involved in this group gaming every second Sunday, and at every other time when he can gather a group together.

Barry's life has always been a full one.  In 1980 he went back to University as a mature age student and completed a Bachelors Degree with a double major in Psychology and Sociology.    He had previously studied at TAFE where he completed his Engineering Certificate, which followed on after he had finished his apprenticeship as an Electrical Fitter/Mechanic.  He also completed a number of other TAFE courses in his early years...even a Shot Firers Certificate for working with explosives in the mining industry!

Barry now fills his time calling four nights a week, gaming, watching movies, reading (although nowadays only audio books!!), listening to music, writing, and spending quality time with his family.  A stroke in October 2017 made him look at his overall lifestyle, with the result that he has had to eliminate some aspects of his involvement in Square Dancing, but is still hanging in there!!