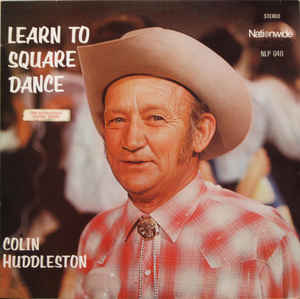 Colin Huddleston was born in Broken Hill on the 1st May 1914 & would have turned 100 this year. Colin was Australia's most well known caller, due to the fact he was on the very popular Reg Lindsay's Television country music show for many years.

Colin was a founding member of S.A. Callers Association & the S.A. Square Dance Society Inc. & was a Life Member of both organizations. Colin also had his hand print laid in concrete in Tamworth for his contribution to Square Dancing & Country Music in Australia. His square dance equipment is also on show in the museum for country music in Tamworth for all to see. 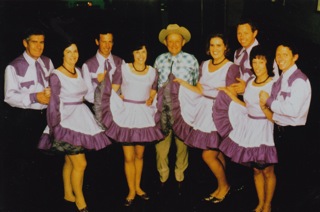 Colin & Sophie had a very friendly club & Wild Frontier often exchange evenings together. We even had one when channel 9 came along to film the evening. Colin's hall was adjacent to the Glenelg Fire Station & during the course of the night the fire bells sounded. All the dancers evacuated & left Colin calling away to an empty hall; he never missed a beat!

Wild Frontier held a surprise birthday party for Colin's 69th birthday. Graeme Whiteley (TAS), Steve Turner (WA), Wally Cook & David Hooper (Vic) were just some of the callers that joined the party. We had around 350 dancers & friends attending this party in our old hall at Kensington Park just opposite the Chelsea Theatre.

People still relate to Colin when making comments about square dancing & whether or not it's still going. Colin was a great friend; Susan & I were with him the night he died which was a very sad occasion for square dancing in Australia.

Kevin and I first started square dancing in 1953, at Port Adelaide. At supper time we would place a rug on the dance floor and have pikelets (I made), coffee, sandwiches cakes etc.... we always ended the evening with the LAST WALTZ.

We then joined a square dance club at the Palais in the city and danced up to 300 with a band. The callers varied some came from interstate including Jim Vickers Wills from Victoria. From this Colin Huddleston formed his own club, which we then joined. Colin hosted a club at Gordon Street, Glenelg every Friday night. Beginners started at 7.30pm and Advanced dancers at 8.30pm. Colin's wife, Sophie would sit at the door and take the entrance money. In the cold of winter she would have a rug on her lap to keep warm and always had a huge lolly jar close by for all to share. The entrance money included complimentary tea and biscuits during supper time. The regular dancers started to bring their own basket suppers and at supper time the teenage dancers would walk a short distance to the fish & chip shop to buy hot chips.

Colin was then asked to bring a square dance set to Channel 9 located at Tynte Street North Adelaide. This is where he joined Roger Cardwell in the weekly time slot. Later Reg Lindsay took over from Roger Cardwell and a full live band was featured. The show ran for more than 7 successful years the band included such members as:

Then Colin organised to take the band on the road to country towns (e.g. Kimba) with a set of dancers. This was a huge success!! We entertained in footy clubs and various halls and the grateful hosts always put on a "Very Special "supper for the entire group. These nights were a great success so Colin, Sophie, Kevin and I travelled to more country towns teaching vim and I. Colin would get the crowd up with the support of Kevin and me. He really was the best teacher and could always enthusiastically get the crowd up and dancing on their first night usually to the tune of "Oh Johnny, Oh Johnny". One time at one of these events they had a chocolate wheel to raise money for the footy club. The winning number was #17 and the prize was a dressed suckling pig. Unfortunately I had ticket #16. The next morning we were invited to a delicious country style brunch at a local farm. When we were leaving, to my surprise, they presented me with my own dressed suckling pig, which I shared with Sophie. This is just one example of the wonderful country hospitality shown to us every time we visited country South Australia, with Colin. I always made sandwiches to eat during the long drive. Colin's favourites were my home made pickled onions on fresh bread with butter.

Colin was a happy and endearing character with an eye for the ladies- this lead to his nick name of Colin "CUDDLES Huddleston". Kevin and I frequently recalled those "good old" days with much fondest and happiness.