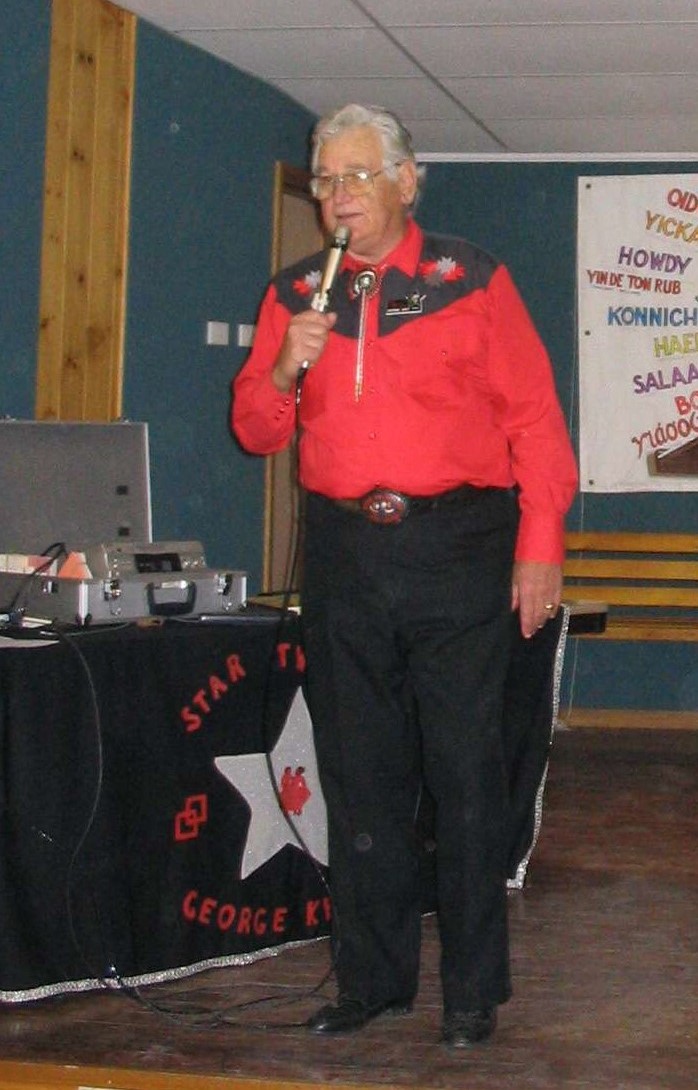 George got interested in square dancing in 1977 when he and Aileen went to a Square Dance night
in Canberra at his son’s school social. The caller was Ron Mennie from Victoria. It was a fantastic
night and George was taken by Ron’s presentation and entertainment with everyone joining in.
George and Aileen were interested and found the only club, The Yellow Rock S/D club run by Drew
Krix close by in Deakin high school and joined that club.

In 1978 they attended a S/D convention at Southlands in Queensland. I think there were about 60
or so callers there, and that’s when he decided he would like to have a go at calling. The rest is
history.

George attended a caller’s school run by Paul Jay, for those interested in calling, using Ron Jones
notes, and help from Brian Hotchkies.

In July 1979 George and Aileen started the Star Twirlers S/D club at the Garran primary school,
helped by Brian. We stayed there for about 12 months than moved to St. Peter & Paul’s Catholic
school hall in Garran where we stayed for quite a long time, then the hall became too big we moved
to a church hall in Yarralumla before we left for the Central coast.
George Kent & Ivan Music started the KM Corral S/D Club in Queanbeyan 1982 – 1985

Over the years, George attended many callers’ schools and seminars run by various interstate and
overseas callers to learn and improve and understand choreography, learning about SC & HD and
how to resolve a square. George was very interested in choreography, and all position dancing,
which later led him into advance dancing and calling.

George was very strict about dancers learning their Basics first before going on to MS and Plus,
with each level learned as APD. To that end he had special classes at home for those dancers who
were interested in going further. This class was only available to dancers from his club.

George and Aileen started the Queen’s Birthday June weekend festival with many various local and
interstate callers as the main attraction. It became very successful with callers like Brian Hotchkies,
Barry Wonson, Paul Long, Steve Turner, Kevin Kelly, Peter Humphries, Bill McHardy and Don
Proellocks, and more. Dancers came from many states, we had BBQ’s, Shows and Skits, put on by
dancers, and dancing Basics, Mainstream, Plus, and little introduction to A level.

1994 was the last of this dance weekend because Ron Jones decided that this would be a great
weekend for the National Convention, and so ended our June weekends to the disappointment of
all concerned.

George called at the following S/Dances:

In 1997 George closed the club in Canberra and moved to the Central coast of NSW.
In 1998 George was asked to start a club on the Central Coast. There was already 2 clubs running
here, and he didn’t want to upset the applecart. After having discussions with Brian and some
encouragement from dancers, he started the Star Twirlers Square Dance club, Central Coast.

The club started with enthusiasm and soon George was teaching Mainstream, Plus and A1 & A2.
With the support of Ron Rawlings and his club, he was calling A level then progressed to A2.
He was soon teaching A level in his home, a few dancers graduated from here.

George & Aileen started a Combined Clubs Xmas dance with all the local club callers being
involved. This allowed all dancers from local clubs to come together at least once a year, it’s still
going and hopefully it will keep going.

The Star Twirlers club had many Halloween, Christmas nights which were well supported by local
and interstate dancers.

Unfortunately after many years the dancers started dwindling, thru old age, sickness and other
problems, to the point where it was no longer feasible to keep going. In 2018 George closed his club and retired from calling.

In closing, we are very disappointed in having to close the club, due to lack of dancers, and Aileen’s
inability to dance anymore; we miss the calling and dancing, the friendship, and all the travels over
the years. We made a lot of lasting friendships in Australia and Overseas in USA.