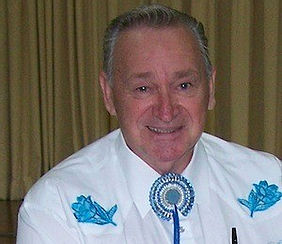 I first started dancing with the Newport Ocean Waves in 1973, The caller was Wally Creighton and that was where I meet my wife Joyce, we married in 1976. We had a break from dancing to raise our boys.

We moved to the Central Coast of NSW and in 1981 found a Square Dance club at Tumbi Umbi and started back dancing. I attended two Callers Schools with Brian Hotchkies in Casio 1986 and 1987. I started the Penisula Rippers Square Dance Club in 1986, I then started a Plus Club and Henry Kendall Squares, Henry Kendall Squares are still going today. I help and sometimes fill in for Brian Hotchkies calling Plus and A1 of a Wednesday Night.

I’ve called in every State and Territory in Australia.

I’ve had International experience calling in the USA, at the National Convention in San Antonio, also places like Denver, Boise,  Oklahoma, California and called at the National Canadian Convention in Edmonton where I called a work shop, Basic, Mainstream and Plus. I’ve called in England and at two Nationals in New Zealand.

I enjoy Square Dancing and the friends I have met over the years.