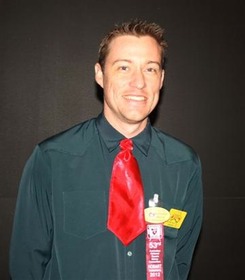 He attended his First Square Dance around the age of 5 and learnt to dance at the age of 7 at Cane Country Squares. After competing in the local clubs amateur callers contest at the age of 17, he decided that he wanted to become a Square Dance Caller.
After learning to call, Matt regularly called at Cane Country Squares alongside his older brother Michael and their mentor Shirley Kelly. Matthew calls for Cane Country Squares where he was promoted to club caller after the group's 25th Birthday and has been doing this role for 6 years. Currently he teaches and calls from Mainstream to A2 and has been a feature caller for several festival weekends and dances in Australia and New Zealand.

Matthew met his future wife Anita at a Square dance during his teenage years and now they are married and have a daughter Mia. The family is quite active in Square Dancing.
Matthew has called at many National and Queensland State Conventions in Australia.
Matthew is currently a board member of the Australian Callers Federation and a member of the Queensland Callers Association.