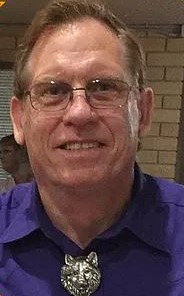 HENLEY ROSS LEARNED TO DANCE AT Shenandoah’s when only 16 He was asked to join Steve’s demonstration set and agreed only because his 2 sisters were in it.  When practicing at his parents’ home he asked Steve if he could call a record, so a new career was started in 1970

In 1972 Ross was one of the original callers that the first CAWA meeting held in 1972.

Until he went to work in Kalgoorlie (1973) he had only had Guest Calls and a lot of help from Steve.  In Kalgoorlie he started Moving Stars Square Dance Club where he called for 2 years, until he returned to Perth 1977.

Work commitments prevented him from calling again until 1982 when he accepted an offer put forward by Riverside’s, where he stayed for 18 months.  At the same time he was a regular Caller for Rocky Top Square Dance Club for 2 years.   In 1984 Ross also agreed to call for White Gum Valley where he remained until 1997. Ross had to give up White Gum Valley as he moved to Bunbury as it was too far to travel each week.

In 1995 Ross was asked to call for Bunbury Squares which he did as he was moving to Bundury.

Ross called for Bunbury Squares for two years until a falling out with the club, which then encouraged him to start his own club called Ross’s Sou Westers. Ross called and ran his club from 1998 to 2003. He then moved to Mandurah. In 2006 Paul Long asked Ross to call for Dolphins on a fortnightly basis

In 2009 Ross took a break from Square Dancing for 7 years.

As of the 10th May 2021 I was asked if I would take over Dolphins Square Dance club as Paul Long has now retired from calling to which I accepted.

In 2013 Ross and Dianna started dancing at WGV for two years when he was asked by the WGV committee to call for then along with Don & Trish which he agreed to and is still there to this day and is enjoying his calling and dancing very much to this day.

Ross has been calling for a total of 36 years.

Ross is also a member of the ACF.