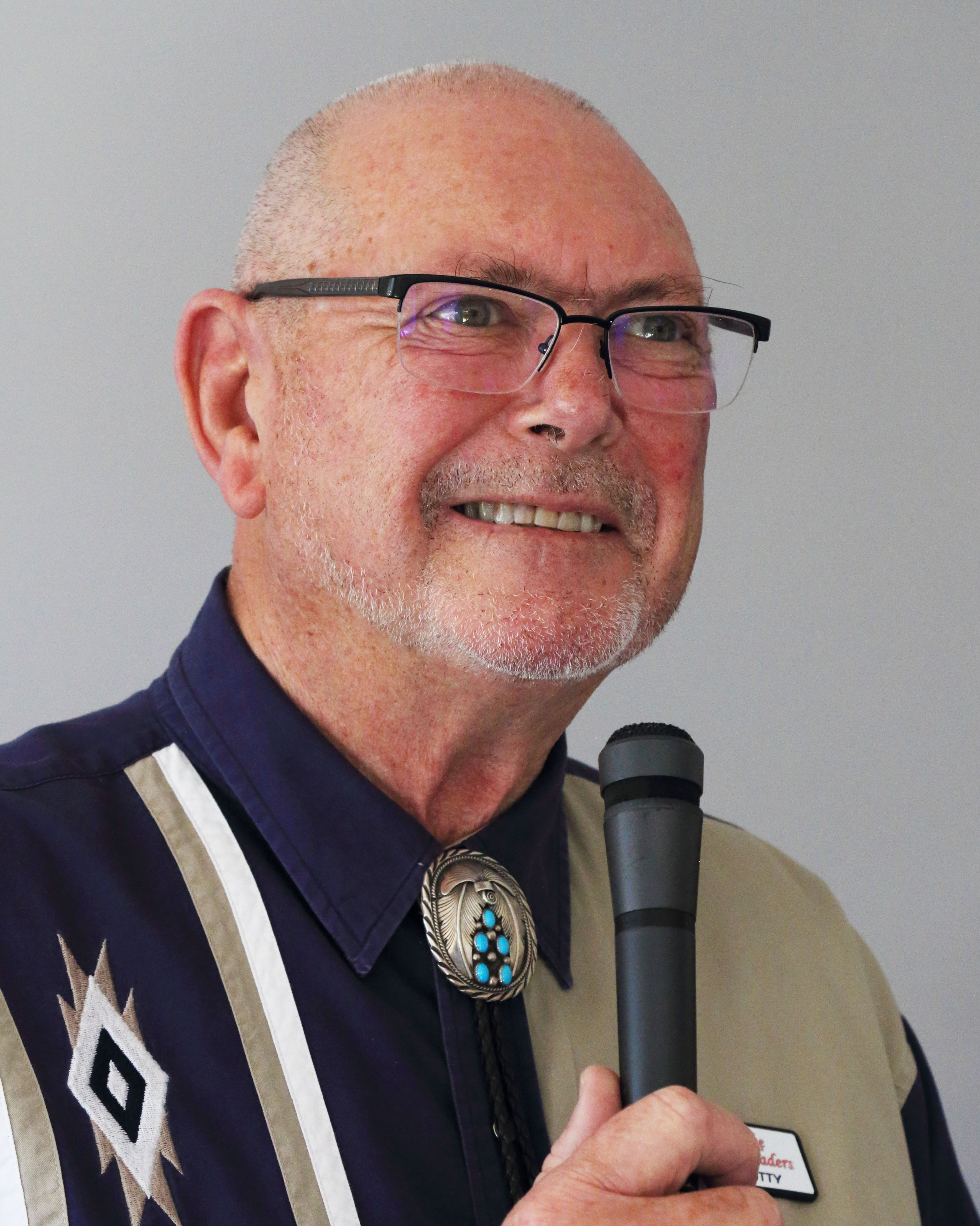 Lyn & Scotty started learning to dance in 1969 with Brian Townsend. After learning to dance, along with Jeff Seidel, they started visiting the other clubs in the Adelaide area. As an interest in the calling side had developed, Alan Frost started giving lessons to Jeff & Scotty in the art of calling.
In 1972 Scotty was based in the Arkaroola area for several months and did several one-night stands at the Arkaroola village. After returning to Adelaide Scotty's job
entailed him rotating out of Moomba Oil & Gas Fields for 18 months, after which he was transferred to Perth for a year.

In mid-1974 the company transferred Scotty and his family to Singapore. Although at this time he was still working offshore they started the Anytime Squares in Singapore. Scotty called for this club for the two years they were based Singapore and would guest call for them whenever he passed through Singapore. The Anytime Squares continued on for many years after Scotty was transferred to his next position, dancing to records under the guidance and direction of Dr Goh.
During his tenure in Singapore Scotty and his family were fortunate to be able to attend and call at the 1976 25th US National Convention in Anaheim, California.

Shortly, after returning back to Singapore from the USA, Scotty and family were transferred to East Borneo. Shortly after arriving in Balikpapan, Kalimantan, Indonesia, they started a club called the Ridge Top Squares. Also, at this time a new LPG gas plant and loading port was being installed at Bontang, about 230 kl to the north of Balikpapan.  Scotty was asked if he would start a club up there as well. This saw the inception of a second club, the Bontang Gassers.
During their tenure in Balikpapan they took a group of dancers from Balikpapan and Bontang (also a group from Sumatra attended) to Singapore to join up with a group of Australian dancers and callers that had come up to Singapore for an After Party from the 1978 Australian National Convention in Perth.
Scotty called for both of these clubs for two years until the family was then transferred to Jakarta.

With their move to Jakarta, in Java, Indonesia, in 1978 they formed the Spice Island Swingers. By 1982 the club was dancing twice a week, one night for learners and the other for mainstream. During this period Scotty was contacted by the Lembaga Indonesia America University and asked if he would call for their club, which he accepted, and called for them on a weekly basis. There was another club at the Cibinong Cement Plant, about 50 kl. south of Jakarta that had only been dancing to records who also contacted Scotty and he was calling for them also.

In 1982 a transfer to Medan, North Sumatra, Indonesia disrupted the family as there were no schooling facilities available in Medan. Lyn decided to move back to Australia with the boys so that they could continue their studies while Scotty remained in North Sumatra. There were two established clubs in central Sumatra, the Sumatra Swingers in Duri and the Shooting Stars in Rumbai, just outside of Pekanbaru. Both clubs had never had a caller and had only danced to records. Although only 80 kl. apart these two clubs had never danced together or visited each other. Scotty's first introduction to these clubs in 1982 was to call their combined clubs graduation dance in Duri. Scotty called regularly for both these clubs during his time in Sumatra. As he also frequently visited Jakarta on business, he also called for the Spice Island Swingers when he was able.

The next transfer, in 1984, took Scotty to Niigata, Japan. On arriving in Niigata he contacted a local club, Red Boot Squares, and joined them dancing and co-calling with their callers. Eighteen months later he started his own club the Whoop & Holler Squares. During his four years in Japan Scotty also attended and called at the All Japan Square Dance Conventions each year.
​
Shekou, China was Scotty's next destination and he spent a year, 1989, here and started the Shekou Squares club. As there were no halls available, and as he was fortunate enough to have a large apartment (they could fit in 3 squares at a pinch) they danced weekly at his house.

In 1990 Scotty was transferred to Kuala Lumpur, Malaysia where he started the Ampang Squares club. This was a weekly dance and was held at the Menarah Indah Apartments Clubhouse at the top of the valley overlooking the Darul Ehsan Golf Course. There was one other club, the Klang Valley Dancers in Bandar Baru area, that danced to records. Scotty visited them several times and called for them.
​
Scotty was moved into a global position with the company in 1999. Due to extensive job-related travel and extended periods away from home he had to forgo having a regular club. During this period he did guest calls in USA, Holland, Germany, Scotland and Norway. He was in Norway for 3 months and the Stavanger Squares had no caller so he called weekly for them while he was there. He also did several nights for the Aberdeen Kilt Kickers when their regular callers were unavailable.
​
Scotty retired from the company in 2015, after 44 years of service, and then was able to start a club in Kadina, the Yorke Promenaders. Although, now living in Adelaide, he travels up to Kadina and calls for them weekly. He also has a club in Salisbury, the Diggers Delights, and has a new learner’s class as yet un-named.