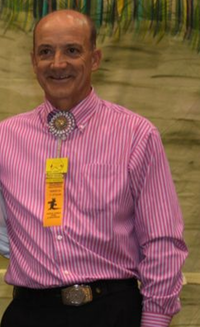 Steve Turner started Square Dancing in England with his family in 1967 before immigrating to Perth Western Australia in November 1968.

The Turner family joined a club called White Gum Valley, the only Square Dance club in operation at the time, after the boom days during the 50's and 60's. A club branched out from White Gum Valley which Steve eventually took over as the resident caller.

In 1973 Steve formed another club, moving into a higher level of dance, the first one of its kind in the West. Beginner classes were being conducted twice a week and in 1982 a Round Dance club (ballroom type dancing) was formed and this new hobby had become 5 nights per week.

In the mid 70's Steve was receiving invitations to call at Interstate functions on weekends and before too long was travelling the country calling from Adelaide to Cairns to Tasmania.

A successful 21 day calling tour in the U.S.A. is an achievement of which he is proud and would be one of the highlights of his calling career.

During the years of 1970-80 Steve had a demonstration dance team which performed in public and at Society functions. Steve has worked hard at his activity, training others to become callers, helping many others, whether it be dancing or committee work and he deserves the accolades often placed on him.

In 1992 Steve became a full-time Caller calling for up to 8 clubs per week, running a Record and Tape business for Callers and entertaining dancers throughout Australia and New Zealand.

In 1995 Steve and wife Sue formed their own Record Label "AUSSIE TEMPOS" with their first release "Lucky Lips" going to number one in the USA. "Light The Candles" was added to the all time classic list of singing call records throughout the world.

2001 saw a subsidiary label to the Aussie Tempos, called "DOWN UNDER RECORDS" 2009 started calling 3 beginner classes a year for the S/D Society of WA