How the ACF Started

The A.C.F. was officially created on the 23rd September 1979 in Adelaide. Going back a little further in time, Wally Cook, Jack Murphy & Jeff Seidel were on tour in North Queensland. Over the odd meat pies & liquid refreshment they discussed the topic of caller programming & ways & mean of how things could be improved for the betterment of square dancing & dancers in Australia.

A list of callers was drawn up, noting what callers had been doing for the movement in their state & nationally, together with their ability to call. A short list of two callers from each state was chosen except for Victoria which at that time had two factions. The two factions had to be considered in an effort to bring together the callers of that state & consequently five callers from Victoria joined the A.C.F. board.

South Australia was to host the 21st National Convention in Adelaide in 1980. This was an opportune time to present this newly formed callers body to the rest of the callers & to the general dancers. So back to the 23rd September 1979, Jeff Seidel (also convenor of the 21st.) took this opportunity to send out invitations (in the same way Callerlab was formed) to a select group of Australian callers to join this new body. 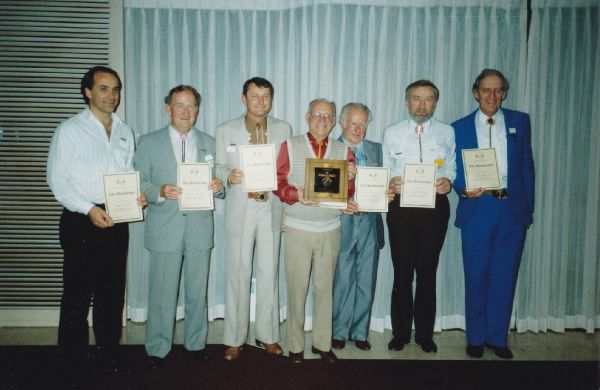 The name "Australian Callers Federation" known as the A.C.F., was the suggestion of Ron Jones of N.S.W. In its early years meetings were held twice a year, one at the National Convention & one about half way between successive Nationals. At this second meeting a fund raising dance was also held. The A.C.F. also started its own newsletter come note service called "News & Notes", later renamed "Caller Link". Steve Turner was our very first editor of this service.